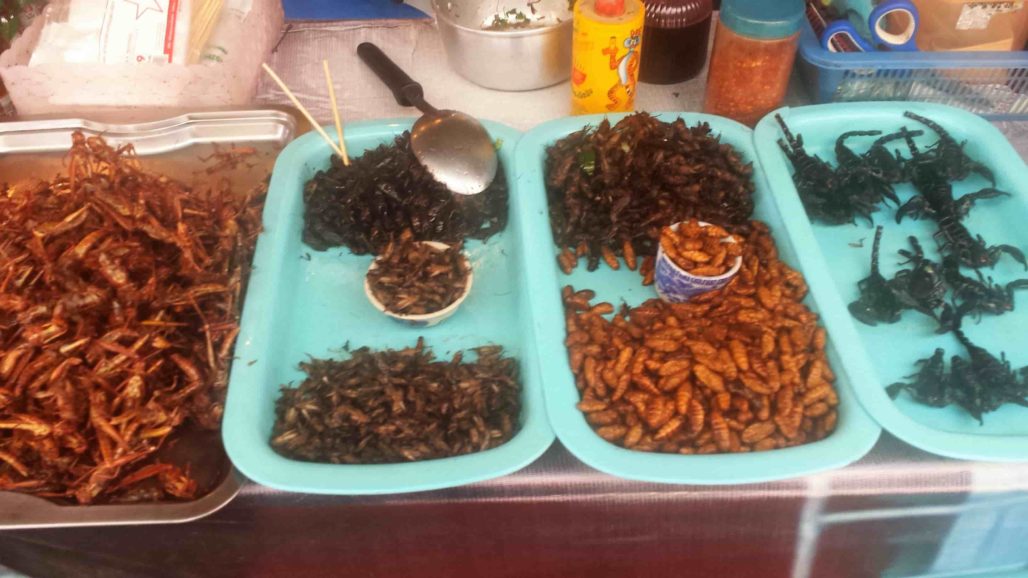 Edible Insects In Thailand at a Floating Market

If you have been to Thailand you probably saw several vendors selling various insects prepared to eat.  They are delicious, healthy and cheap.  I actually tried some when I was there.

I predict that we will see a rise in eating bugs here in the same way.  It just makes sense.  Recently we have seen predictions that we are headed for another great stock market crash.  This one is predicted to be bigger than the one in 2008 because the market is so much higher.  Bugs have been popular in Thailand because they are so available.  Especially in the northern areas where there is less to eat.  This plays to our advantage because we won't have to reinvent the wheel.

Here is a list of edible bugs, may of them we can get in the United States.  Thanks to the blog, Girl Meets Bug, for the list.  I am especially encouraged that girls, and cute girls are going for it.  YaY!  🙂 🙂  Here is the list that I think you can get here in the US.

Up and Companies Promoting Healthy and Sustainable Eating with Bugs!

Us, HealthyThaiRecipes.com.  🙂  For more edible insect post and recipes stay tuned to our blog.

Chapul  I also recommend watching several companies that are trying to make eating insects more mainstream. One was seen on Sharktank.  Chapul is the name and I was so happy when a well respected Billionaire was willing to go in with them.    They do lots with crickets and their website has a lot of good evidence to support this viable food option.

Chirps  Another interesting up and coming company with a similar goal is Chirps.    They are making chips out of crickets.  I think there is a future here and we are definitely all in.

I was inspired today at Houston Health Museum when a young volunteer was able to recite a lot of interesting facts about "Eatemology" as I think he put it.  Super nice kid going to be a dental assistant for his career and doing this as an assignment.

I have a video of him speaking about eating bugs and the health benefits and aspects at our youtube channel.  To see it go search for healthy thai recipes.  As of now the audio quality is poor and I will be adding captions.  In the mean time I recommend going to the health museum in Houston to learn more.  It is our favorite museum here!!

A guy first tried introducing sushi in the US in the 60s.  It was known that Americans couldn't handle the idea of raw fish as well as the seaweed wrapper.  A guy in Canada figured out that if you put rice on top of the seaweed people liked it.  Thy still had trouble with the raw fish as some people still do though.  The way they got past this was starting with tuna which people who did try it preferred.  Another thing that got things moving was the California Roll recipe.  It used no fish and got people eating the thing that was the general framework.

For me, I wasn't going to try it until I saw my lovely sister-in-law light up when she saw them.  The insect was silkworm larvae in lemongrass.  She is so feminine and attractive I thought if she could do it so could I.  I said, I will if you do which was no trouble at all.  It was actually really fun.  I hope you are open minded enough to have the same fun.  🙂

Eating Healthy on a Budget, It is Possible! Here are 10 Ways

The Thai Taste Bud, One of the Toughest in the World