Central Thai Brown Rice Vermicelli with Lentil-Peanut Sauce is a recipe that was inspired by a family recipe we found in a cookbook.  I go through the pile of books, and what Google finds, in my free time looking for something that pops out and this did it this month.  Since it was my brain that got excited by this recipe, I was the lead chef and Mod was the Sous-Chef.  This is also a Central Thai recipe that Mod had never tried before.  We enjoyed this recipe as much for something to do together as for the intricate flavors and gorgeous presentation. 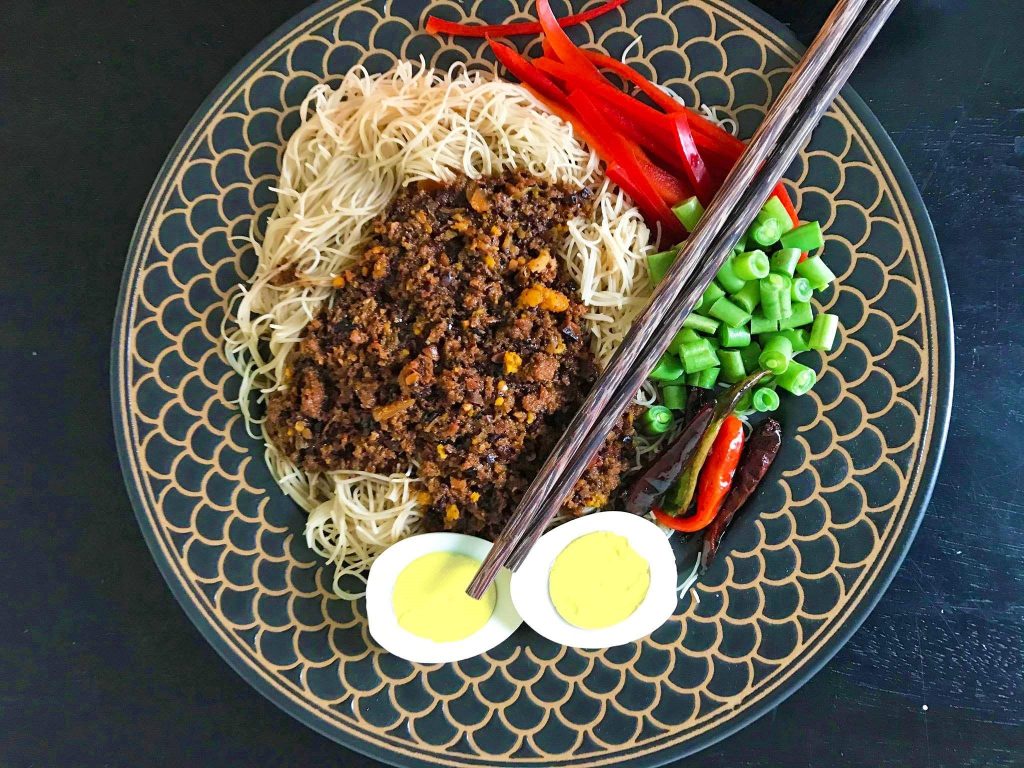 Mod said cooking this dish reminds one of the recipes the servants make in Thai soap operas.  Back in the days, Bangkok and other provinces surrounding it were traditionally where the royalty and wealthy lived and had servants to cook them super elaborate recipes.   When you can stay home all day and just eat and cook you can afford to micro-manage all the tiny details in a recipe.  Thailand has always been a country of rich resources so I think this sets the tone for a perfect storm of relaxed focus on nuanced and beautiful harmonies of flavors.

Finding all The Ingredients

This is definitely a recipe that you will want to make as an experience like they have done in Central Thailand forever.  We spent an hour on the weekend just finding all the ingredients.  We could have done it faster once we realized that Kroger now carries pink lentils in the international section.  Lentils are super cheap too, you can also find the brown rice vermicelli at western-style supermarkets now more often. In some areas, you may have to go to an Indian market for the pink lentils, golden lentils, or whatever you find.  We went to the Indian market for the lentils and then saw them in Kroger the next day.  I used the ones that were split already, I figured it's more surface area for the hot surface to cook.  Here is the one we bought.  It's available on Amazon at this link. 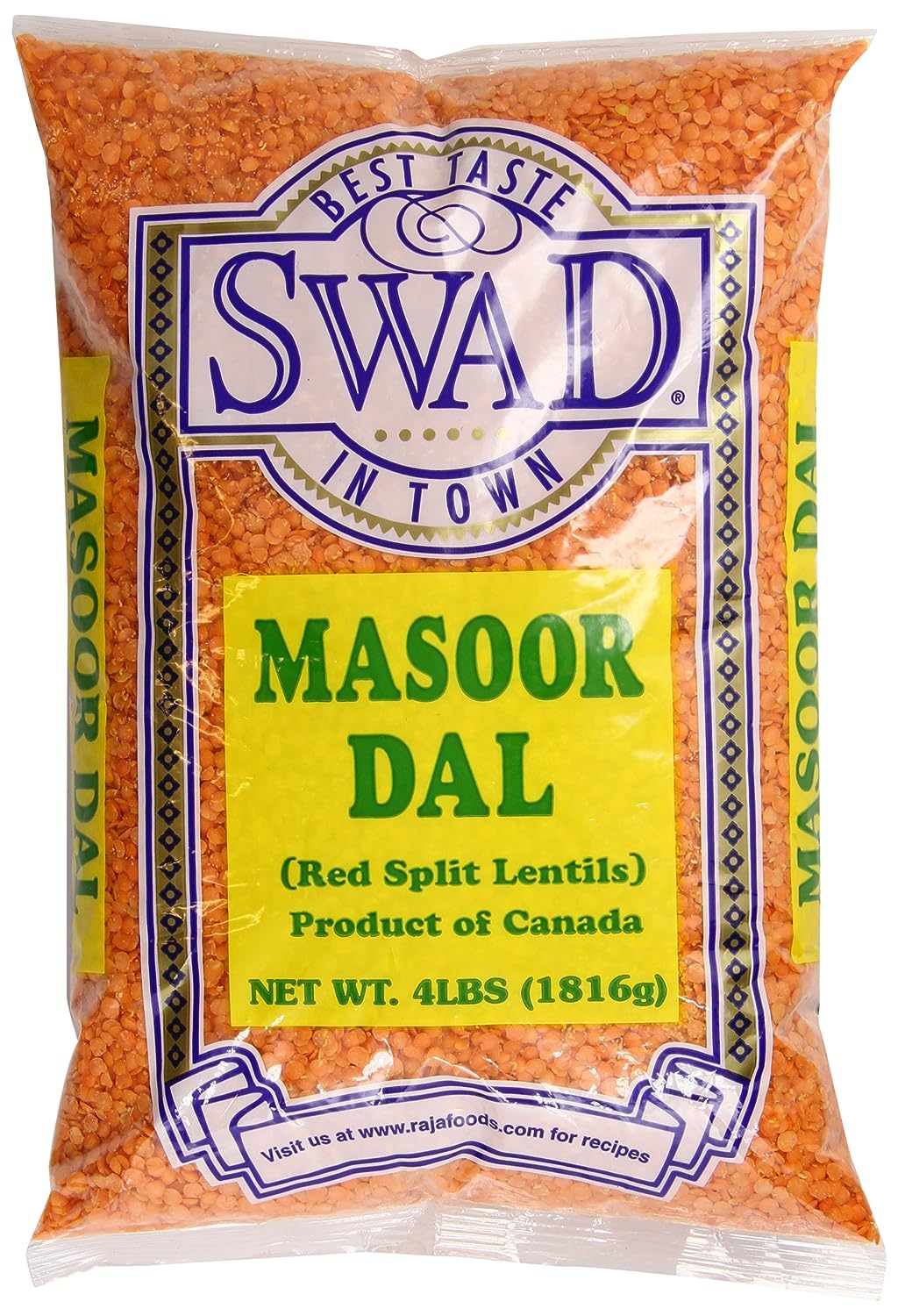 For the Thai chili jam, you can make it, but holy cow this recipe is already elaborate enough.  If you want to make it, we owe shesimmers.com a little love for the inspiration for this recipe from her gorgeous book called Bangkok we used, so here is her recipe for Thai chili jam.  If you want to save a little time like we did because we are already at our limit, here is a link for the Pantai chili paste we used.   Use whatever chili paste you like, making your own is good if you really want to watch what goes in your body.

Bangkok, Cook Book we used and recommend. Not an affiliate, just love the book.

We loosely followed the recipe, Rice vermicelli with lentil-peanut sauce in her book with the typical substitutions we make, that we think are a little healthier.   If you go to the Asian market, you might want to also pick up tamarind paste, light coconut milk, Thai shrimp paste, Thai peppers and galangal.  This is assuming that you are also going to your typical supermarket, if you are in the western hemisphere, like us.  I know this is a whole adventure.  Hopefully, that covers most of them.  For this recipe, since it is so elaborate I will place links to all the ingredients I can find on amazon after the printable recipe to make it easier if you use amazon like I do sometimes.  I'd print this one and check off the ingredients as I went to be safe. Print Recipe 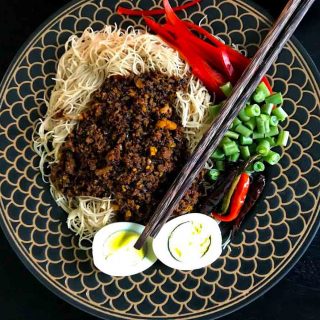 Nutrition calculations are an estimate.  Some of the values were not exact in the computer api so nutrition for regular rice vermicelli was use used rather than brown rice vermicelli.  Also, there will be variations and irregularities in any product between samples due to good the good old fashioned law of entropy in of the universe.  ;p

Here is how I liked my plate served.  I used ample sauce, more than in the above photo and mixed it all together.

Here is a list of the harder to find ingredients with links to make it easier on you if you want to buy on amazon.  I am not an affiliate with them currently, this is just for you.

Links to ingredients may change depending on vendor availability.  Please let me know in the comments section if any of these links break.

If you love Whole Grain Vermicelli; You might want to try one of these recipes

Thanks for reading our blog!  If you have special dietary concerns, please consult with an appropriate doctor or dietitians.  Here at healthythairecipes.com we are not dietitians or doctors or nutritionists.  We are just people trying to live healthier and rehab the recipes the best we can.  If you have ideas, concerns or suggestions we would love to hear them in the comments section.  Please share this on social media if you love it.