A crisp, refreshing starfruit cooked in Thai salad style with Thai peppers, fresh mint leave, cucumber, red onion, fresh lime juice, fish sauce, and a little sweetness from stevia.  It's a very delightful dish that you'd love to try and share with your family and friends. 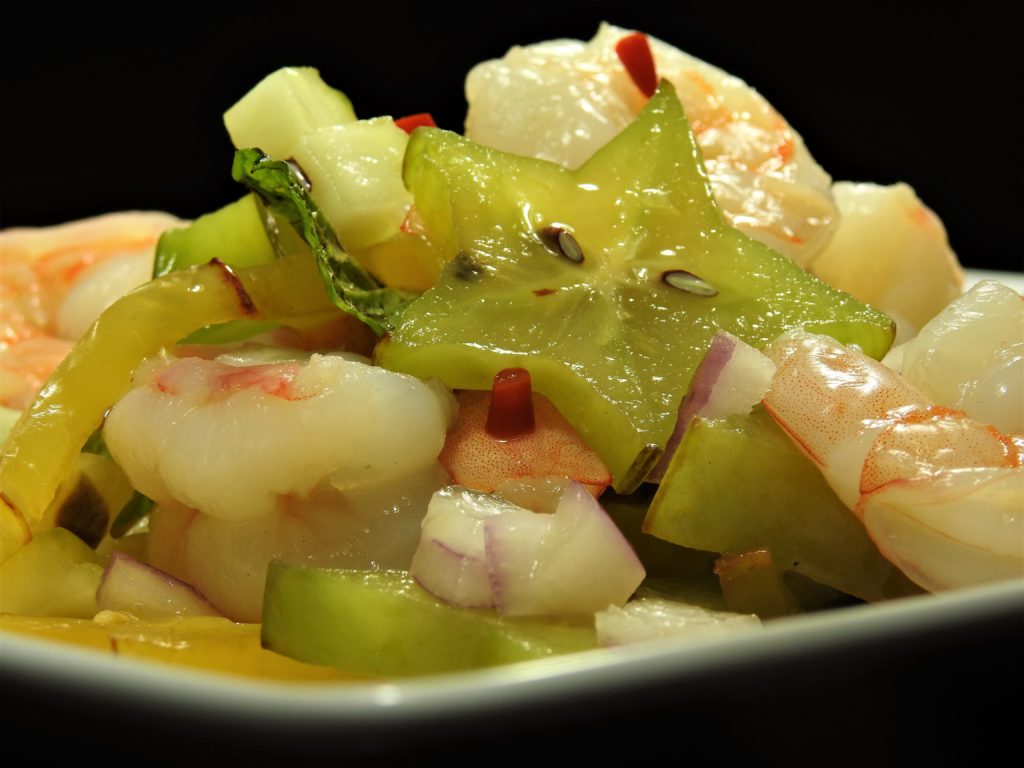 Carambola, or starfruit is a cylinder fruit with ridges along on its side.  It has the origins from South and Southeast Asia.  Most of the starfruits have about five ridges on the side.  Sometimes, some of them have less or more ridges.  When you cut the starfruit into a cross-section, those ridges become the V-shaped projections, and those make the starfruit looks like a star.

Growing up in Thailand, I remember seeing this fruit everywhere.  I never bought it when I was in Thailand because I always got it for free.  I remember my dad used to make a joke about the starfruit.   In Chiang Mai (my sweet hometown), we have nice grocery stores that carry goods from overseas.  One time when we're there, and I asked my dad if I can buy those expensive fruits.  He said that I didn't want them, and he had "a five-star fruit" for me when we got home.  He handed me a bunch of starfruits and told me to cut them up, for I had the five-star fruit! Ah!!!  #whenyourdadtrytobecool 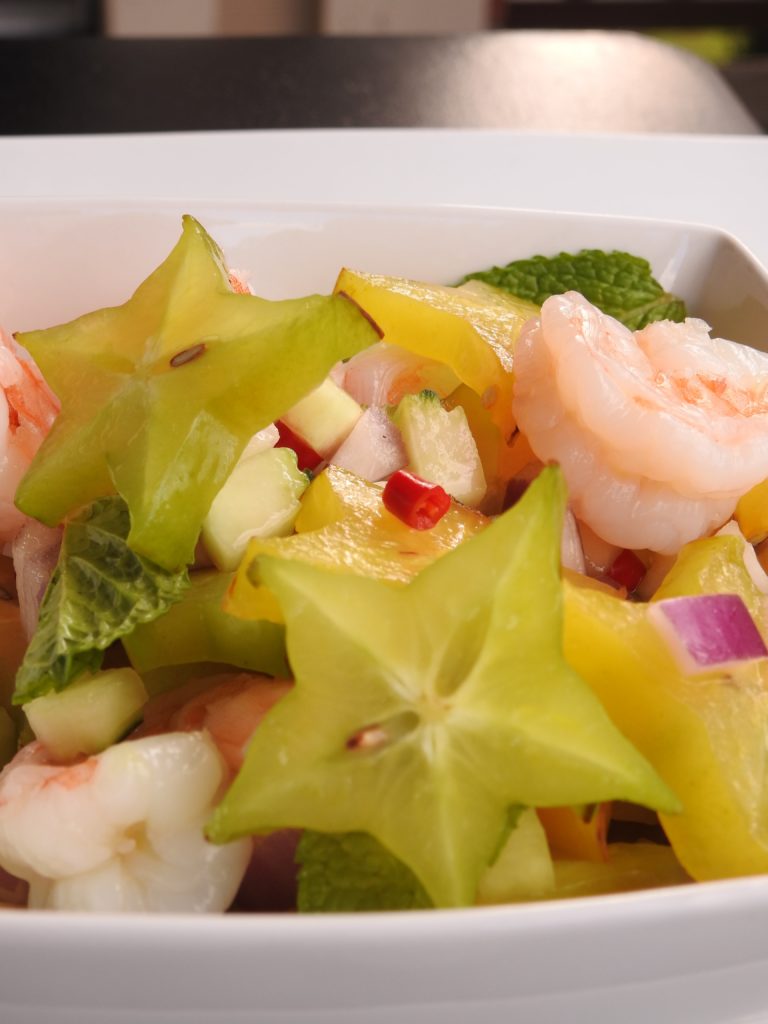 This exotic, tasty fruit has high vitamin C.  As you know that vitamin C can prevent you from having a cold, and its antioxidant can protect your skin from wrinkles.  Starfruit contains so much water in it that it’s a good source for dehydration.  Consuming starfruit regularly can help decrease the anxiety and stressed level, and it can boost your good mood and put you to a good sleep.  If you’re controlling your weight, starfruit is a good choice of fruit you should try.  One hundred grams of starfruit has only 2.8 grams which are three times less than oranges.

Starfruit has so many good things in it, but please pay attention if you are suffering from kidney failure, kidney stones, or under the kidney dialysis treatment.  Oxalic acid in the starfruit can combine with calcium in kidney, and it can accumulate and become stones in the kidneys.  The oxalic acid also has a side effect on decreasing blood cholesterol and depression medication.  For those who are taking these medicines, you might avoid or talk to the doctor before consuming the starfruit. 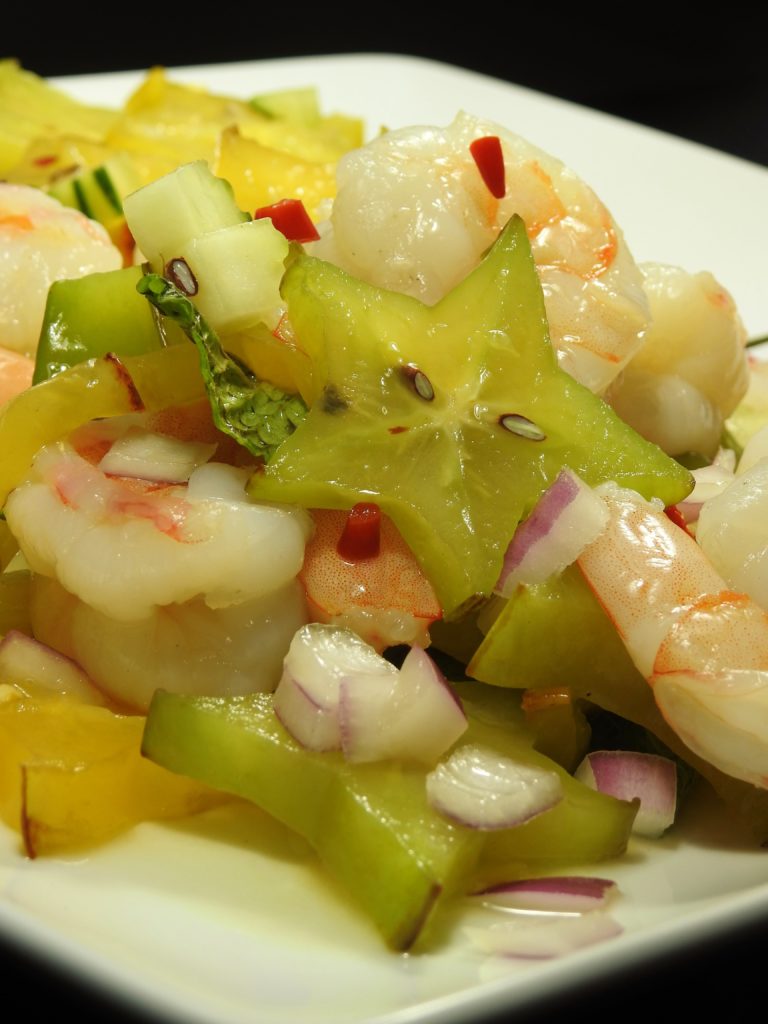 How to choose the starfruit

One thing that’s very convenient about the starfruit is the whole thing is edible.  The skin doesn’t need to be peeled.  The seed is very small and doesn’t have any foul taste.  You just wash and slice it.  The starfruit is just like the other fruits.  They’re the young ones (green color) and the ripe ones (yellow color).  The green starfruit is tart and crunch like Granny Smith apple but juicy like grapes.  The yellow starfruit is sweeter than the green ones but not too sweet.  It’s juicy soft like oranges but not as sweet as them. 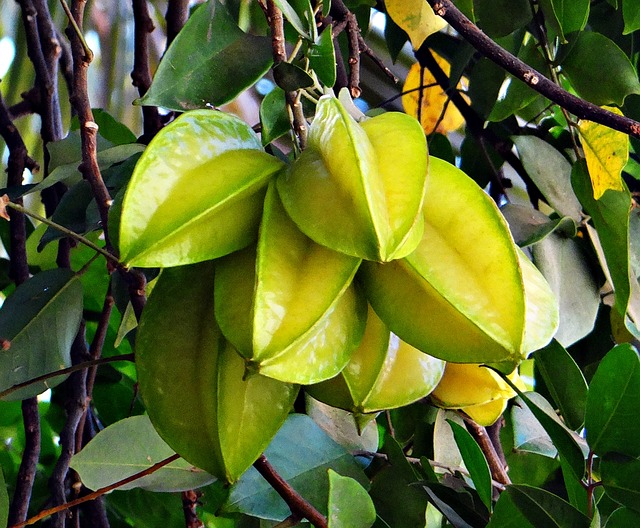 Lots of you guys may not be familiar with eating fruit with salt, fish sauce and may feel strange about this recipe like my husband who didn’t understand it until he tried some of the recipes I made, and he becomes a fan of those recipes.  It’s unusual for non-Asian people, but I think you all can do it.  I believe that you are a very open person since you decide to visit HealthyThaiRecipes, and I guarantee that my recipes won’t disappoint you. 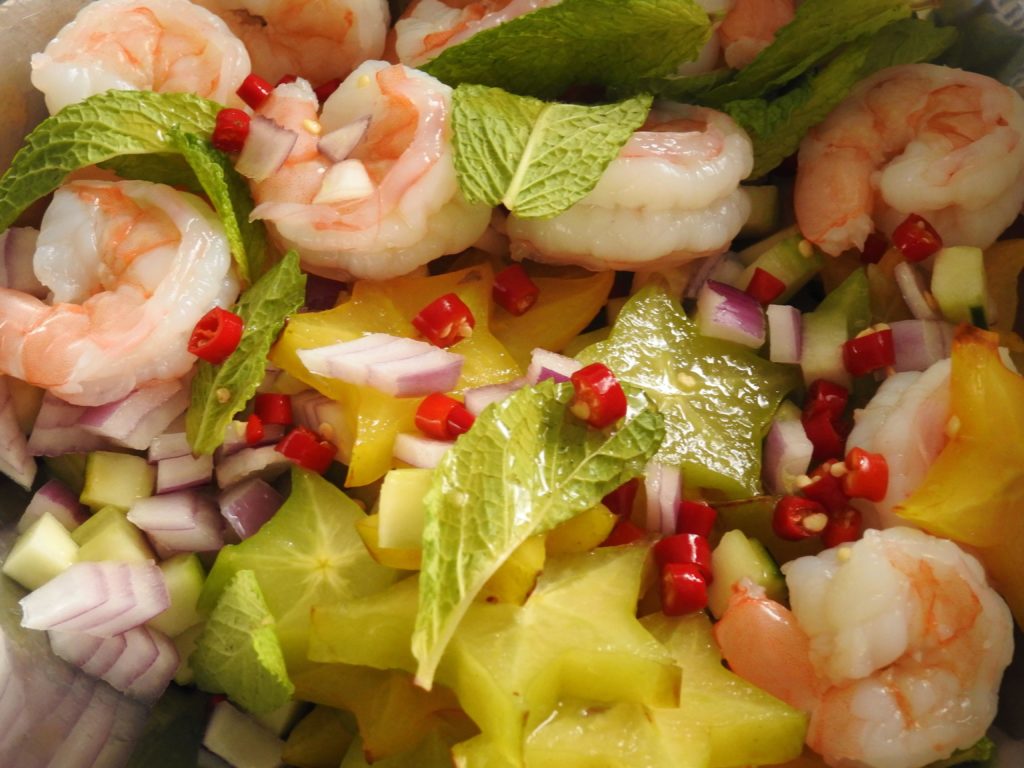 What is the ultimate Thai salad dressing?  It has only main four ingredients which are fresh Thai peppers, fresh lime juice, fish sauce, and a little bit of sugar.  It is the four elements for four flavors that are essential in food – spicy, sour, salty, and sweet.  You can adjust this salad dressing and use it to make Thai glass noodles salad, seafood salad, or fruit salad.

The dressing I made is so good, but I decide to add some more flavors and fragrant in the salad to make it more enjoyable.  I added some fresh mint leaves which are always good to put in Thai style salad.  It tones down the smell of fish sauce.  Red onion gives natural sweet flavor, and cucumber is delicious when it soaks up the salad dressing.  Be careful with the onion as it can be overpowering.   Last but not least, I put some large cooked shrimp in it, so my salad would have protein, carbs, minerals, vitamins, and some fat.

Starfruit Thai Salad with Shrimp
Recipe Type: Salad
Cuisine: Thai
Author: HealthyThaiRecipes
A crisp, refreshing starfruit cooked in Thai salad style with Thai peppers, fresh mint leave, cucumber, red onion, fresh lime juice, fish sauce, and a little sweetness from stevia. It's a very delightful dish that you'd love to try and share with your family and friends.
Ingredients
Instructions
Notes
You don't need to serve the salad immediately but don't leave it more than an hour before eat it because the taste may change after a while.
3.5.3226